Saga of the Missing Socks and Other Tales of Woe

Who but another postpartum mom could believe that I had a meltdown over doing laundry? I literally fell into a weeping puddle of self-pity, certain that I’d never get caught up. Nursing a newborn day and night, tending a toddler and a preschooler, homeschooling the older two, cooking, cleaning, laundry, church ministry, not to mention being a wife to my husband—it was just too much.

Our boys were 9, 7, 4, 2, and 3 months. I was 38½ years old, going on 80. We had made it through Christmas and were trying to get back into the routine of homeschooling, but I just couldn't seem to manage. I went to bed tired. I got up tired. Clearly, I needed more help than my vitamin bottle offered. I wasn’t bouncing back as I had from my other pregnancies. Something had to change.

In our marriage we have an expression: “I’m crying tired.” We don’t use it often, but when one of us says it, the other understands that it’s time to step up and do whatever it takes to help out, or at least to give the person some space or sympathy or support—or all three.My hubby, bless him, heard me out and hugged me, exactly what I needed. Since I don’t cry often, I’m sure he wondered what had come over his wife. I wondered the same thing. I had always been a reasonably competent sort of person, and here I was lamenting over the laundry. All I could think of was how to escape.

Sobbing, I offered him two options: hiring a housekeeper or letting me run away from home. To his credit, he didn’t laugh at me. But we both knew that the first wasn’t in the budget, and the second obviously wasn’t an option either.We talked it over after I settled down a bit, and he helped me identify precisely which straw was about to break this mom’s back—the laundry. I decided that if I had help with the laundry, I might stay home and raise his children after all.

At his suggestion, I offered the task of doing the family laundry as a paying job to one of our sons.Our second son was eager for some extra pocket change. I had my doubts about whether this ambitious 7½-year-old could really handle the mountain of laundry our family of seven generated. After all, the weekly pile covered an area the size of two bathtubs and came up to his waist. This didn’t include the towels or sheets. When you add lots of boys to lots of livestock chores, the sum is lots of grimy clothes. I suspect we far exceeded the national average of fifty pounds of laundry per week, as reported by the Soap & Detergent Association.

But after a bit of training, he cheerfully gathered, sorted, treated, washed, dried, and folded the laundry for the princely sum of $5 each week. He was thrilled to get the money to build up his football card collection, and I was relieved to be freed up for other tasks. And Hubby rejoiced that he didn’t have to face a weepy wife each night after work.Our son continued doing the family laundry (all except my personal items) for three months until I was back on my feet emotionally and physically. It was the best $60 we ever spent. And I eventually did get a handle on the laundry. Here are some ideas that worked for us.

We all know that each load of clothes has to be sorted twice—once by fabric and color when it goes into the washer, and again when it comes out of the dryer to determine ownership. The toughest items to sort are underwear and socks, especially if you have several children of the same gender who are close in age.

To save time when sorting clean laundry, I bought each boy a different brand of underwear—a two-week supply to give me a little margin if the laundry didn’t get done every week. It was easy to sort when all the size 10s were Hanes, the size 8s were Fruit of the Looms, the size 6s were Penney’s, and the size 4s were Mickey Mouse: All I had to check was the color of the waistband to know whose pile they went in. As a boy grew into the next size, he inherited a new brand. Even though the size tags had long since vanished, the waistband colors remained. So whether I did the sorting or called the boys in to claim their own undies, it was an easy task.

Likewise, each boy had a different type of socks. One had socks with two stripes, another with three stripes, another with no stripes, and another with gray feet, making sorting a breeze. This system guaranteed that each son could have no more than one unmatched sock coming out of the drier. When every sock they owned was the same color and style, there was no longer an inventory of orphans in the dresser drawer awaiting a grand reunion each laundry day.

What about girls who wear outfit-matching colors? My mother had a clever way that worked for the socks in her two-daughter household. She would put one dot of red nail polish on the sole of my socks and two dots on my sister April’s. As my sister grew into my socks, Mother would add a dot to them, so April continued to have two-dot socks until I moved out of the house. I considered the same option with the boys, but they wouldn’t hear of having nail polish on their socks. Maybe I should have tried permanent marker instead.

It does take some courage to give away perfectly good underwear and socks to start a new system. And if the sorting isn’t a challenge in your family, don’t change what you’re doing. My friend Shari, who has eight children still at home, does laundry every day so it doesn’t pile up. She washes the laundry from one bedroom each day so the sorting is only for one to three children in a load. She places the folded stacks on her bed so the children must pick up their clean clothes before she can go to sleep that night. Ask God to help you find a system that works for you.

Place three hampers in each bedroom closet, including your own. One is for whites, one for colors, and one for darks. I like to use tall hampers or tall kitchen wastebaskets because they hold lots of clothes, especially as the children grow into larger sizes. You could use boxes or laundry bags hung on the back of the door if floor space is a challenge.

Teach your children to undress in front of the hampers, placing their dirty clothes in as they change clothes. This keeps clothes off the floor and it teaches them to sort by color at an early age. Hint: My boys were more inclined to use their hampers if we left the lids off—they made a game of shooting baskets with their rolled up socks.

When you are ready to throw in a white load, have each child aged ten and under bring his white load into the laundry room for you to add to the family laundry. If you have an eleven-year-old, he is in training and assists you all year until he absolutely knows everything you know about doing laundry. When he turns twelve, he does his own laundry: He is working you out of a job. Eventually, you are only doing laundry for yourself and your husband. This frees you up to drive your young teens to their various meetings, lessons, and jobs. And it teaches your children to take care of their own clothes.When they’re responsible for their own clothing care, children don’t change outfits nearly so many times a day or throw barely worn clothes into the laundry so they don’t have to hang them up. And if you’ve purchased a two-week supply of underwear and socks, your child will have enough clothes to make up at least a small load of each color group when he begins doing his own laundry.

As I look back, my Laundry Day Meltdown seems a bit overly-dramatic, but it contained the seeds of reformation. I learned to look at my routine tasks in new and creative ways to free up my time for those most important to me.

Psalm 126:5-6 tells us, “They that sow in tears shall reap in joy. He that goeth forth and weepeth, bearing precious seed, shall doubtless come again with rejoicing, bringing his sheaves with him.” Although this was written in the context of Israel returning from captivity, the application rings true for us as well. Often our greatest fruit is harvested from times of tearful frustration when we’re on the edge of hopelessness. Our tears water the seeds for the new crop the Lord is planting in the garden of our hearts. He uses irritations and aggravations to draw us close to Himself for comfort, just as my husband comforted me on that dark day in the laundry room. And then He instructs us in the way we should go. Remember: He cares about every little thing in your life, even matching up lonely socks.

(C) 2008 by Marcia K. Washburn. Looking for practical tips and encouragement for your household? Check out Managing Your Home from the Management for Moms series here. 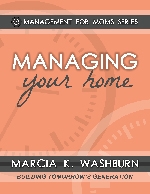 For more tips and encouragement, check out Managing Your Home here.