Spring is a time of new beginnings. New beginnings imply changes—some welcome, and some not so welcome. Our focus this time is on the many times of letting go that will occur in our lives as parents—releasing our little and not-so-little children into the world.

In Psalm 127 we are told that children are a heritage and a reward from the Lord. The writer tells us that they are like arrows in the hands of a warrior and that the man who has a quiver full of children is blessed.

My husband is a bowhunter. Through the years our family has enjoyed the venison, elk, and wild turkey that his skills have brought to the table. I have never seen him go out hunting with less than five arrows in his quiver, although he seldom needs to use more than one arrow. He makes and examines his arrows carefully before leaving for a hunt. The fletching, the synthetic feathers that make it fly straight, must be well-designed and carefully glued into place. The shaft must be straight and the proper weight for the game he is hunting.

As we raise our little ones unto the Lord, we must use exquisite care to help them to develop into godly men and women. When we are ready to release them into the world, they must fly straight and true. Initially, we send them out on little practice flights, always with a string attached to pull them back to the nest for more teaching and coaching. As they grow older, we can trust them with longer and more difficult flights, until ultimately they are shot out into the world to serve the kingdom as mighty warriors for the Lord.

In a sense, releasing our children begins as we pray for them before they’re even born. We care for them during pregnancy by observing wise nutritional habits, avoiding harmful substances such as second-hand smoke, and getting good pre-natal care. The actual formation of the precious child is in God‘s hands, as we’re reminded in Psalm 139.I remember vividly picturing myself holding our child on outstretched palms, realizing that even if I tried to close my fists to hold him tight, he could slip away at God’s first call.

Many parents dedicate their infants in a public ceremony at church, promising to raise them “in the nurture and admonition of the Lord.” Parents are commissioned to watch over their little flock. But how easy it is to act as if they are only safe with us. We have need of balance between sheltering and trusting. How easy it is to forget that children all over the world manage to grow up without anti-bacterial soap, patented vitamins, and personal bodyguards (AKA “mothers!”) hovering over their every move.

Sometimes we are called to release our children much earlier than we had expected. In the Bible, Hannah was called to give up Samuel to the Lord’s service when he was only about five years old, the typical age of weaning among Hebrew mothers.Our children’s times, like ours, are in the Lord’s hands. He controls how long our children will live to serve Him and how soon they will be promoted to His service in heaven.

Our family lost a twin son at about eighteen weeks gestation, before we were even aware that I was carrying twins. During the next four months my body served both as a womb for his living brother and as a tomb for little Enoch (so named because God took him, as He did Enoch in the Old Testament). Many re-thought their understanding of the humanness of pre-born children when they saw us treasure Enoch’s tiny body and bury it in a handmade oak casket at the foot of a favorite uncle’s grave. Many hearts were softened toward the Lord. Enoch’s purpose had been fulfilled even though we never knew this little son. And, as our then-seven-year-old son said, “He can show us around heaven when we get there.”

As our little ones grow, we set boundaries that limit what they are allowed to do. Toddlers may be briefly placed in a playpen during times when no one can actively supervise them. Soon they graduate to a baby-proofed room with a security gate. Before we know it, they have the run of the house, then the yard, and even the neighborhood, with parents still monitoring friendships, activities, and curfews.These early limits not only protect the child from physical harm, but train him to obedience.

We are told to “Train up a child in the way he should go and when he is old he will not depart from it” (Pr. 22:6). The picture here is one of staking up a tomato plant. If the plant is not tied to the stake, the tomatoes do not develop properly. The very thing that restricts the young plant is what allows it to mature into all it was designed to be.

We were pleased to discover the unexpected benefits of training our oldest child to obedience. As the younger ones came along, we as parents were already trained in the self-control necessary to be consistent in following through with discipline. We strove to create a culture of righteousness in our home—younger siblings noted how the older one acted and tended to follow in his path. This is not to say that they never challenged us—each child had his own temperament and needed correction from time to time—but the expectations had been set. They learned that this is how people in our family act—a positive peer pressure that has been a powerful motivator in their lives. They do not want to disappoint God or their family members. This has been especially helpful during the teen years when increasing privileges permit additional temptations.

The principle of balancing additional freedoms and privileges with additional responsibilities is an important one, particularly in a large family. Our five sons span almost ten years in age. The youngest obviously could not be released in the same areas the oldest was. Driving is a good example of the way we as parents can gradually release our children to greater responsibility. Our oldest son’s first driving experience was on a 1950 Ford tractor around our acreage in rural Northeastern Colorado. This probably is not an option for most of our readers, but most families have access to a large vacant parking lot. Here the young driver can get used to steering, braking, and turning.

As his skills improved, our son drove on country roads, then in a nearby small town, and finally in city traffic. Even after he earned his driver’s license he was only permitted to transport family members for the first several months of driving. Gradually he was allowed to drive selected friends (no more than one other person in the front seat, four in the car). The first several times he drove on icy roads, it was with a parent, even after he was licensed. We told our son that just because the State of Colorado said it was legal for him to drive anywhere at anytime, that didn’t mean that it was wise for him to do so yet.

The same principle applied when he began to drive on big city highways. We would let him drive to the outskirts of Denver; then he would ride in the front passenger seat while the parent drove through the more congested areas, narrating the trip and his driving decisions as he went. Finally we chose a quiet Sunday afternoon for his first experience of handling big city, multi-lane driving. He drove with a parent many times in highway speed traffic before he was permitted to drive alone on the congested freeways. By that time he had been driving for over two years. This step-by-step approach has served us well with the younger sons, too. It doesn’t seem possible that our youngest will be getting his learner’s permit soon and we will again be going through the same pattern of gradually releasing him as a young driver.

As a part of the release/responsibility balance, each of our sons pays for his own car, gas, and insurance. Since my husband has mechanical experience, they have chosen vintage cars such as Mustangs from the 1960’s and 1970’s. They work with their dad to restore their cars, a great time of bonding in the early teen years. Since their own money and labor have gone into their cars, they are highly motivated to drive them carefully. In addition, these old classic models tend to appreciate in value, unlike most newer cars.

As parents, we will release our children many times through their lives. When they leave home for college, career, marriage, or military service, there will be a release. Some close family friends have learned to release their daughter for mission service in Cambodia, realizing that she is safer there in God’s will than if she stayed at home when He was calling her to serve in one of the world’s hot spots.

Eventually, the circle of authority between parents and child becomes a circle of counsel. As our children establish their own homes, they will make their own choices. Some choices will be wise, some not so wise. They will be much like us!

What a blessing it is to have an adult child say when looking for a marriage partner, “I want what you and Dad have.” And what a privilege it will be to see them raising their own children to be arrows properly prepared to shoot God’s blessings out into the world.

(C) 2003 by Marcia K. Washburn. For more advice and encouragement for parents, see Managing Your Children from the Management for Moms series here. 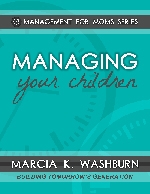 Want more insights on raising your children for the Lord? See Managing Your Children from the Management for Moms series here.