God Knows What You Need

God knows who you are. He knows where you live. And He knows what you need.

How often we forget these truths! We get bogged down in the daily details of making meals and making a living, teaching kids and training the dog. God seems like some remote being, removed from our daily lives. We call on Him only for emergencies—sickness, accidents, wayward children—and figure He’s busy with the rest of the world the rest of the time. It’s as if we think we only get a limited number of requests, so we’d better save them up for when it’s really important.

How little we understand our loving Father. Just as He was there forming our tiny bodies in the womb,[1] so He is as close as our next breath. He knows when we are too weary to keep going. He knows when we are at our wit’s end in dealing with our children. He knows when our relationship with our spouse is deteriorating. And He cares.[2] He cares about the tiniest details of our lives. And His care shows up in some very interesting ways.

When I visited the headquarters for Christian relief agency Samaritan’s Purse[3] in Boone, NC, I was fascinated to learn some of the details involved in shipping millions of Operation Christmas Child boxes around the world each year. People all over the country fill shoeboxes with school supplies, personal hygiene items, and toys for children who have very little. Volunteers inspect each box before shipping, removing any items that might spill or melt. Other than that, they respect the integrity of the box—whatever the giver places in the box stays in the box. As the boxes are delivered, the Gospel is shared and many come to Christ.

The guide told three stories about the shoeboxes. One shoebox had seven toothbrushes in it. It was given to a little boy who had never owned a toothbrush before. And he had exactly seven people in his family. At the distribution sites, no one knows what’s in any individual box. They are divided by age and gender only. God knew who he was, where he lived, and what he needed.

The second box was stuffed with a tape player and several music and Bible tapes. The child who “just happened” to recieve that box was blind. He would have had no use for crayons or other things that most of the boxes were stuffed with. God knew who he was, where he lived, and what he needed.

A little girl living in an orphanage in Kazakhstan received a shoebox full of gifts. When she received the gift, she was happy, but she confided to her house mother, “I appreciate the gift, but what I really need is parents.” This Christian care-giver simply replied, “Well, just pray and ask God for parents.” When the girl opened her shoe box, along with the wonderful assortment of gifts there was a card and a photo of the people who had given the box, a couple with no children. After praying, the little girl wrote to the donors, thanking them for the gifts and telling them how she was praying to God for parents. The American couple, touched by this little girl’s faith, found their way to her village in Kazakhstan to meet her and ended up adopting her. God knew who that little girl was, where she lived, and what she needed. Out of all the shoeboxes distributed that day, this box was given to her. And in meeting her need, He also met the yearning for a family in the adoptive couple, building a family in a most unexpected way.

Richard “Little Bear” Wheeler told a story years ago about traveling evangelist Ken Gaub. Ken tells the story in God’s Got Your Number.[4] While driving down I-75 south of Dayton, Ohio, Ken and his family pulled in for pizza. He was exhausted from ministering to everyone else, wondering if God even knew where he was. He sent his family into the restaurant and went for a walk, hoping to unwind a bit.

After buying a Coke, he started back toward their bus. A pay phone was ringing from a phone booth at a service station as he walked by. He figured he’d tell the caller that he obviously had a wrong number so he answered the phone. The operator said, “Long distance call for Ken Gaub.” Astonished, he hardly knew what to say. He even considered that he might be on Candid Camera.

When the operator connected the caller, she was weeping. Through her tears, she told Ken that as she was writing a suicide note, she began praying and telling God she really didn’t want to die. She had seen Ken on a TV show and thought if she could talk to him, he might be able to help her. Not knowing how to contact him, she just wrote down the numbers that came to her mind. She decided to take a chance that the numbers would connect her with his office in Washington state. But of course he wasn’t in his office; he was at a phone booth in Ohio.

Realizing that only God could have arranged for her to reach him, Ken counseled her and led her to the Lord. As he walked back to the bus, he realized again how, in His amazing way, God had met the needs of both of them—the suicidal woman’s need for salvation and hope and his own need to know that God knew where he was.

A musical homeschool mother with several children gave birth to a disabled child who needed constant nursing care. Exhausted from months spent caring for her child, she asked the Lord, “Will I ever be able to use my music again?” Meanwhile, the director of the statewide homeschool choir became too ill to conduct their concert. The accompanist knew both women and invited the weary mother to substitute. God knew the needs of both women, one for a replacement, and one to realize that during this time of sacrifice for her child, He hadn’t forgotten her emotional need to again make music with others.

“Therefore humble yourselves under the mighty hand of God, that He may exalt you in due time, casting all your care upon Him, for He cares for you.”[5] God knows who you are. He knows where you live. He knows what you need. And He cares.

©2007, 2018 by Marcia K. Washburn who writes from her nineteen years of experience homeschooling five sons. 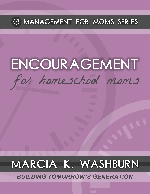